Prism Comics will be exhibiting for the first time at the Long Beach Comic Con
and is extending the invitation to you to be a SPECIAL GUEST CREATOR at the show.
We have free, one hour signing slots every hour on the hour as follows:
Saturday, October 29 10:00 AM – 6:00 PM
Sunday, October 30 10:00 AM – 4:00 PM
Write me with your choice of morning or afternoon and we’ll schedule you.
GUEST CREATORS get 50% of sales during the signing, the way you would with most comics shops.

Prism is also looking for VOLUNTEERS.
Volunteering provides a good opportunity to promote your books as well.
Please spread the word if you have friends who might like to volunteer.

Space is limited and on a first-come, first served basis,
so please let me know as soon as possible. 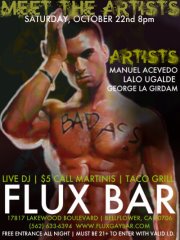 BEEFCAKES AND BOUNDARIES: THE ART OF BRUCE BELLAS

In the same pioneering spirit as many others who have packed their bags and headed west, Photographer Bruce Bellas, or Bruce of Los Angeles as he came to be known, arrived in California in 1946 and immediately began challenging the norms of acceptable society. With post-war conservatism growing, Bruce of Los Angeles photographed Muscle Beach’s most beautiful male bodies and published an extensive body of homoerotic work during a time when institutionalized homophobia was the norm. His pin-up images of the male physique pressed the boundaries between art and obscenity. Having influenced contemporary photographers such as Robert Mapplethorpe, Bruce Weber, and Herb Ritts, Bruce of Los Angeles is regarded as a “creative force in the establishment of the modern homosexual identity.”

This exhibition will showcase a collection of “The Male Figure” the physique magazine Bruce of Los Angeles published himself and original prints of the his extensive body of work as well as exhibit the work of contemporary artists who’ve found inspiration in the classic style and boundary breaking approach that mark the contribution Bruce of Los Angeles made to art as we know it today. 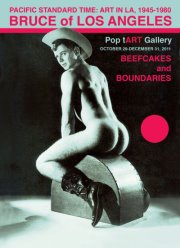