Claus Nieländer was the architect that realized the design of artists Michael Elmgreen and Ingar Dragset for the Memorial to Homosexuals persecuted under Nazism in Berlin.  The Memorial opened on May 27, 2008 and Nieländer told me that it has been the recent target of violent vandalism. 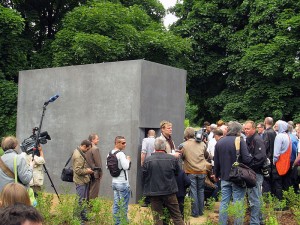 Elmgreen and Ingar Dragset are the curatorial team that created the installation
The Collectors at the 53rd Venice Biennale.

Claus and his friend Arnd found ToFF on the ‘net and enjoyed seeing Tom’s reference binders and looking at the pictures of The Collectors that Elmgreen and Dragset had just sent to Foundation HQ.

They each have TOM titles in their own collections and were impressed with the XXL book. Tomorrow they are to see another significant Los Angeles monument – the Watts Towers.