Appearing on the rock station’s most popular program, Heikelä Korporaatio (Heikelä Corporation), Durk and Sharp discussed a range of topics, including the forthcoming Tom of Finland postal stamp series, a newly-released book of Tom’s comics in their original Finnish text, the Tom of Finland biopic in development by director Dome Karukoski – and even Tom’s influence on popular rock music.

Three video clips of Durk and Sharp’s appearance, along with a complete audio interview (downloadable as an mp3), are now available at the station’s Tom-of-Finland-tagged page. 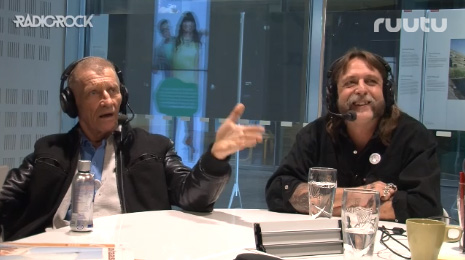 Speaking in the studios of the rock music radio station, Durk commented on Tom’s influence on popular rock music:

Look what happened in the ’80s with Tom… He was so popular within rock music in that people like Adam Ant, Freddie Mercury, Judas Priest – all of those were actually reflecting him. They were either embodying his visuals in their presentation or their songs.

On the forthcoming Tom of Finland stamp, Durk declared:

I think that the Finnish Post Office deserves applause. They put a (naked) butt on a stamp.  I mean, I don’t think there’s been a butt on any stamp anywhere in the world before.

Finland is currently experiencing a wave of attention on Tom of Finland, with a number of projects, all accomplished with ToFF support, coming to fruition. The Tom of  Finland postal stamp series – initiated by ToFF with Finnish postal service Itella Posti – will be released on September 8. The stamps’ release will coincide with the launch of an exhibition of Tom’s correspondence, Sealed With A Secret – Correspondence of Tom of Finland, which will be the inaugural show at Finland’s new Postal Museum in Tampere. A Finnish language book of Tom’s comics, Tom of Finland: Sarja Kuvia, newly-released from Finnish publisher Like Publishing, includes several stories that are appearing in print for the first time. The book was launched on Thursday at the opening of another exhibition, Tom of Finland: Dirty Frames, an exhibition of Tom’s comic art that also includes work by other ToFF-associated artists.

Last Thursday’s opening of the comics exhibition “Tom of Finland: Dirty Frames” attracted a capacity crowd at Helsinki’s MUU Galleria, with many attendees needing to cool off outdoors. Durk Dehner, Tom of Finland Foundation (ToFF) president, later praised the launch as the best opening of a Tom of Finland exhibition that he had attended, with ToFF Vice President, S. R. Sharp, adding: “Everyone was laughing and totally enjoying it!”

The exhibition is one of the highlights of the 29th Helsinki Comics Festival (this year celebrating queer artists). The festival recently posted an album of photos of the launch to its Google+ profile, including photos of Durk and Sharp:

The outstanding crowd response also coincided with national media coverage of the exhibition by Yle, Finland’s public service broadcasting company – both in the 6pm news bulletin on Yle’s TV channel TV1 the next night and as a story on Yle’s news website.